It's amazing what sorts of things actually became hit records in the Sixties. 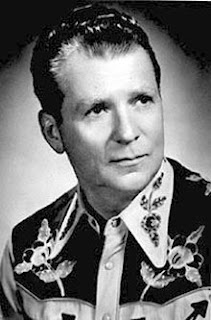 Buddy Starcher was a country singer/guitarist best known for the goofy, not-entirely-accurate, 1966 proto-conspiracy theory record "History Repeats Itself," which, according to wiki: "...hit No. 39 on the US Billboard Hot 100 chart and the album of the same name from which it was drawn peaked at No. 37 on the U.S. Country Albums chart." And what an album it is, both fascinating as a historical relic, and as uniquely absurd entertainment.

Starcher intones these melodramatic spoken-word pieces like a good-ol-boy who's put on a suit and is giving a very grave speech to the local Kiwanis club. All of his conservative messages and sappy stories are backed by somber patriotic and country music, except for the comic relief track "A Taxpayer's Letter."  In "Day of Decision," Starcher claims that "...this is the age of the American cynic. The year of the unbeliever. The day of doubt." Woo-hoo, it's about time! "We change channels when a political discussion comes on."  You say that like it's a bad thing. "We've decided that elections and politicians have been bought and sold, like cattle." Er, no comment.

What the hell is up with "Eve Of My Multiplication"? Is it about someone with a math test the next day? Re: "The Fall of A Nation": Atilla The Hun's name was pronounced "AT-la"? Well, maybe it was. Not like he's around anymore to ask. "Judge, What About Me?" is supposed to be a tear-jerker about a "lame" boy and his divorcing parents, but I LOL-ed throughout this unintentional comic gem. Not so funny is the pro-Vietnam bullshit, e.g: the redundantly titled "Brave Men Not Afraid," in which we are informed that soldiers are not afraid to die. They aren't, eh? (Don't you love it when non-soldiers speak for soldiers?)

The hit single claims to find a number of parallels between Presidents Lincoln and Kennedy. I guess this was supposed to be considered weird and eerie, but it's really just a bunch of meaningless coincidences, some of which aren't even true. You could do this with any number of things, even without having to make up facts, and indeed there are some other similar tracks on this album. I think it's time for new records of this sort. How about the chilling parallels between John Cale and Brian Eno? (cue dramatic music)

- Both were born in the UK, and moved to New York City.

- Both came to prominence as founding members of hugely influential avant-rock bands.

- Both left those bands after their first two (2) albums, after clashing with the bandleader.

- Both became producers of some of the greatest artists in alternative rock.

- Both were born in months that start with the letter 'M':
John Cale in March
Brian Eno in May

- Both had brief but torrid affairs with Dawn Wells, who played 'Mary Ann' on "Gilligan's Island" (unverified)

Yes, my friends, it would appear that once again...history repeats itself.

Buddy Starcher "HISTORY REPEATS ITSELF"
(there's some skipping on track 2; sorry, I did my best, even put coins on the tone arm, etc.) 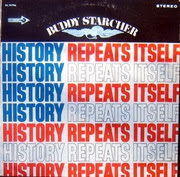 I passed this up in the dollar bin recently, had no idea what it was. I may need to see if it's still there. Surely no one else will buy it. :)

Yep, fished this one out of the 99 cent bin recently, where all the best stuff is. But you better grab it Ernie now that I've written about it. You've heard of the 'M4M Bump'? (No? Er, thats because I dont think there is one.)

Is the audio from track 1 supposed to also be part of track 2?

Sorry Bruce, i blame them damn hippie commies. Should be the correct file now.

I am from Charleston, WV. Buddy was quite a big deal here in the late fifties/early sixties. I have a "History Repeats Itself" collectible china platter my great-grandparents bought at the time. Buddy's steel guitar player, Herman Yarbrough, or his alter ego Roscoe Swerps, stuck around until his death a couple of years ago, occasionally playing, and selling cars at various dealers around the area. Here's a link with a little bckground info -

Great link, thanks for that cool bit of history. Odd how a man who'd been singing for years should have his biggest hit album be all spoken word.

They both (apparently) managed NOT to sleep with Nico, by all accounts no mean feat.

They both contemplated decking Lou Reed (but, uhm, who didn't?)

This could well be a thing.

This stuff can always raise a grin but checking out Buddy Starcher on Discogs I found this: http://www.discogs.com/Buddy-Starcher-History-Repeats-Itself/release/6636112 !!!! I think you might want to go back to that bin - Audile

Audile - Thats a different album. Looks like they tacked on the hit single to a collection of otherwise unrelated country songs.

The Eno song that mentions the Modern Lovers is "True wheel", I think?
Yeah, I was gonna add to the list "they both thought Lou Reed was a dick. KIDDING!" but I really didn't know how Eno got along with Reed. Tho I suppose we can guess.

"True Wheel" it is! Eno-Cale could be a drinking game...if I was younger. Actually, remember those Pete Frame Rock Family trees? I'm sure he could have a field day with these two.

BTW, your blog flat out rocks; thanks.

I appreciate all of your contributions to this blog, one of my favorites. I do think you are doing the right thing by posting. Keep working such this kind of interesting content. Be good!

You are a good egg. Edith Massey would approve.

Um. Why Eno and Cale in this post? Dig your postings but commentary is sometimes wack.

Because as I wrote in the post, the song "History Repeats Itself" attempts to draw eerie parallels between Lincoln and Kennedy that are not very eerie at all, just a bunch of semi-accurate coincidences. I pointed out that you could draw such parallels between any number of other things, e.g. Eno & Cale, as I thought I made clear. You in the back, pay attention!!