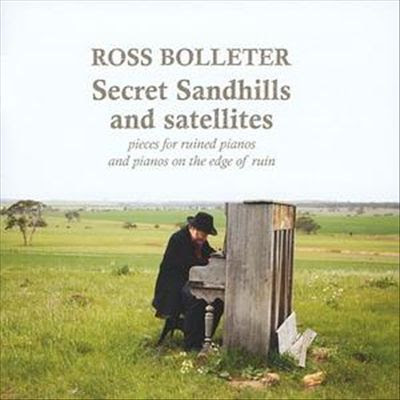 "All digital recordings made in Australia around Perth and Alice Springs 2001-2005. Pieces for ruined pianos and pianos on the edge of ruin... The main work, inspired by an Aborigine painting, is the 28-minute Secret Sandhills, a generally slow-moving work spliced together from performances on six ruins. There are also 10 shorter and generally faster Satellites, some of which were performed on two ruined pianos simultaneously. Fresh new sounds from decaying old instruments."
Posted by Mr Fab at Monday, July 13, 2015

Aha! Somebody else is having the same problem as me! I have a Mac, and the Google situation seems to be that you need to download some software which won't work if your computer is old because they simply don't give a shit about people who can't afford a shiny new gadget. Isn't technology wonderful?

On the other hand, although I couldn't download files to begin with for that reason, I can now, even though my machine's too old to accept the software. It seems that I can download but not upload. I think perhaps our esteemed blogger, upon being forced to switch file-sharing methods because something went horribly wrong with the previous one, may, while getting used to the new system, have uploaded some files in a slightly different way which causes problems for Macs which he never noticed because he hasn't got one. Or something. It's all rather confusing, really...

Anyhow, it's something like that. If your Mac's reasonably up-to-date you can probably sort the trouble by downloading that Google file-sharing software, which is free but in my case useless.

Change of subject! I was momentarily miffed that one "Buttress O'Kneel" got the credit for telling Mr. Fab about this ruined piano musician when I distinctly remember that it was me. Then I realized that the picture and the name weren't familiar at all. So did I perhaps mention a completely different guy in another country who coincidentally does exactly the same thing? And if so, does the fact that more than one farm full of rotting pianos exists on this planet mean that reality is broken, we're all living in The Matrix, and at any moment we can expect The Four Horsemen Of The Apocalypse to thunder through a crack in the sky, closely followed by Eleven Mustachioed Daughters? Discuss.

So sorry, Otto, I checked my mail and yes it was indeed you who introduced me to this fella. 'Twas so long ago, and took me sch a long time to find some albums by this guy that I forgot, please forgive.


Thanks you for this -- looks cool.

I'm using a Mac with an older OS and don't have any problems dl'ing files from Google: I just click the link, which takes me to the file in Mr. Fab's Google Drive, then I click Download (the icon with the arrow pointing down) and save the file somewhere. No additional software or Google trickery required (I'm using Firefox instead of Chrome, though).

Sorry to bother you but there's a missing track, number 6 Save What You Can. The zip package shows this file is there and number 7 is missing. But track 06 in the zip package is mp3-tagged "Going to War..." and is 4:23. This concurs with discogs. http://www.discogs.com/Ross-Bolleter-Secret-Sandhills-And-Satellites/release/1428803
Thus the name of the 06 file should be 07 Going to War etc., and track 06 is missing. Thanks.

Well, that's odd. Don't know how that happened, but thanks for the tip Kenny, I have uploaded what should be a correct copy of the album now.

I've got no idea why I thought there might be more than one of this guy - I suppose my memory is no more infallible than Mr. Fab's was when he thought it was some other fellow who told him about this chap. However, it does put me in mind of an interesting idea. In the days before the jukebox, British pubs usually had a piano - I suppose something similar applied in America. Nowadays, not that many people can play the piano, and the regulations are getting stricter all the time, so if there have been any complaints about noise the pub probably doesn't have a live music permit, But there are still quite a few neglected pub pianos that sit there because it's not worth the effort of binning them.

Has anybody ever investigated this? I assume that in terms of playability, they're in better shape than a rotting ruin in a field, but still hopelessly out of tune, and most of the ones I've seen don't look as though they were very good pianos in the first place. So we'd probably be looking at tone-deaf honkytonk (which may also be the name of the world's least useful Chinese superhero). I can't play the piano so I will not personally conduct such a survey, but it might be interesting to obtain field recordings of what you could presumably refer to as "unprepared pianos". It would probably be a good idea to do this when the bar isn't too busy. Anyway, it's a thought.

PS - On a related note, what about Nora The Piano Cat?

"Has anybody ever investigated this?" I have that someone could do something with all the free pianos (and organs) being given away on craigslist.

Download from Google Drive works fine for me - on a MacBookPro with Mavericks, using the latest Safari.

Confusingly you need to click the download (upside down T / I shaped icon) in the top bar.