By request, the private-press lounge crooner Mr. "Home" Center is back up. 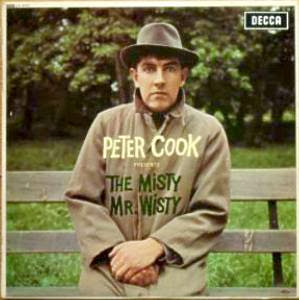 Count Otto Black, our expert in silly 78 rpm oddities, has sent us another batch of wonderfulness, this time a collection of out of print rarities by British comic genius Peter Cook. Two songs from a single, the entirety of the 1965 "The Misty Mr. Wisty" album, and a couple of other leftovers, inc. a brilliant call-in radio show prank. Quite a revelation to me, as I only knew Cook from his work with Beyond the Fringe and his subsequent partnership with Dudley Moore.

Quoth the Count: "...let us consider the bizarre character E. L. Wisty who, with slight variations, featured throughout his career. He is a paranoid schizophrenic based on a mentally ill staff-member at the private school he attended as a boy. At least one psychiatrist commented after watching his performance that if somebody exhibiting those mannerisms and speech-patterns checking into his clinic, he'd unhesitatingly diagnose him as a genuine schizophrenic who couldn't possibly be faking it!

E. L. Wisty was invented for an early sixties British TV show called The Braden Beat. The host wanted a weekly guest spot for Peter Cook that was similar to the famous (and still hilarious) "Dagenham Dialogues" performed by him and Dud on their ground-breaking (but, thanks to the stupidity of the BBC, only partially preserved) show Not Only But Also. Incidentally, since you're not British, I should explain that Dagenham is a suburb epitomizing dull, shabby, working-class London. It is famous for exactly two things (other than the Dagenham Dialogues of course) - the Dagenham Girl Pipers, the only British majorettes that anyone has even vaguely heard of, and the phrase "a couple of stops short of Dagenham", meaning mentally unbalanced, since if you're traveling in a southerly direction, Dagenham is two stops after Barking.


Anyway, in the absence of Dud, that format, in which a very stupid man with delusions of brilliance (Pete) explains lofty subjects to the only man in the world more stupid than he is (Dud), couldn't be used, so a character who had been the high point of Pete and Dud's breakthrough review Beyond The Fringe was revived. Technically, that character, though never named on stage, is called Arthur Grole, and he is very similar but not identical to E. L. Wisty. Both are strange men sitting on park benches and talking nonsense in a peculiar monotone, but Arthur Grole is always talking to, or rather at, somebody else, whereas E. L. Wisty is alone and talks straight into the camera. Also, Arthur Grole's major preoccupation in life is dissatisfaction with his job, since he wanted to be a judge but didn't have the Latin for it and had to be a coal-miner instead. E. L. Wisty has no job, and apparently almost no contact with anybody else, other than his best and only friend Spotty Muldoon, whom we never meet, which, given that is covered from head to foot in terrible acne, is probably just as well.

Although these sketches were written for television, E. L. Wisy was almost entirely motionless and expressionless, and sat on a park bench staring hypnotically at the camera while he delivered his monologue, so the entire visual content of this material is basically the same as the photo on the album cover.
And finally, a few non-album extras comprising the only other material recorded by the character officially known as E. L. Wisty. This single reached No. 34 in the UK charts in 1965. Even though Peter Cook never could sing to save his life, the B-side is oddly poignant. The character's brief celebrity also led to him starring in several beer adverts that were aired on British TV and released as a flexidisc (remember those?). American readers way be unfamiliar with the Watney's brand. All I can say to them is: lucky old you! As mass-produced characterless British beers go, Watney's is arguably the worst of the lot, and inarguably not much better. You may have noticed Eric Idle's repeated references in the Monty Python travel agent sketch to "bleedin' Watney's Red Barrel!" This is a beer which has an exceptionally long cask-life, allowing it to be profitably sold from venues which for some reason don't sell very much of it, and nothing else going for it whatsoever. It's supremely ironic that a man who was eventually killed by alcohol helped to promote the world's worst beer in the character of a madman who was completely wrong about everything. Or is it more ironic that Watney's hired him to do it in the first place? Go figure...
Therefore, without further ado, I give you his 1965 album The Misty Mister Wisty." 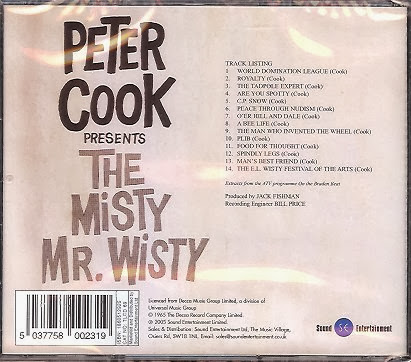 Southerly direction? Are you sure?

Very nice to see Mr. Cook remembered thusly. Came to your blog only recently from the Flashstrap extravaganza. Best wishes!

The dry, deadpan comedy is my favorite genre within the vast humor spectrum.

Can't wait to hear this!

'It's supremely ironic that a man who was eventually killed by alcohol helped to promote the world's worst beer in the character of a madman who was completely wrong about everything.' -- brilliant!