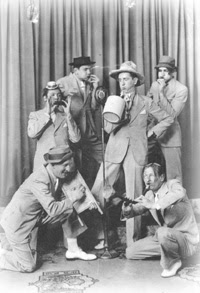 The trumpet player looks and plays amazingly like George Rock, Spike Jones' longtime side man...is it one and the same?

Good call, Don! Yep, George took over after original trumpeter Nels Laasko left to help form the Korn Kobblers in '39. He became a City Slicker in '44.

Reminds me a bit of the Hoosier Hotshots..."Are ya ready, Hezzie?"
Jack

That's something I'm gonna have to figure out, Jack - the timeline of all these groups. Who came first, what members were in what band, etc.

According to the Hoosier Hot Shots own web site (www.hezzie.com):
--Bill