STAR TREK FAN BANDS: NOT NEARLY AS BAD AS ONE WOULD THINK 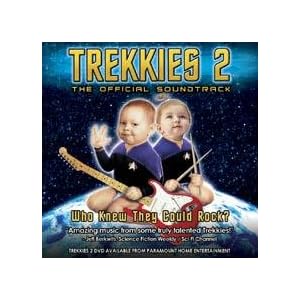 A Klingon death-metal band. Just think about the sheer awesomeness of that concept.

"Trekkies 2" is a 2004 documentary about the most extreme 'Star Trek' fans, produced and hosted by, of all people, Bing's granddaughter Denise Crosby. The soundtrack album features some funny bits of dialogue from the film, a few soundtrack cues, and lots of entertaining fan songs. Somehow Fred Schneider of the B52s ended up on here as well. Maybe he's a Trekkie? Wouldn't be too surprising.

As for the musical acts, who pretty much only perform at 'Trek'/sci-fi conventions, Warp 11 are quite good in that Descendants/Bad Religion/Green Day-style of melodic punk. "Everything I Do, I Do With William Shatner" really is as good as it's title. No Kill I: The Next Generation (yep, that's the band's name) make a great Devo-ish New Wave ruckus. Ash Productions are two charming teenage girls. Reminding us of Trek fan history, Leslie Fish does it old school: a solo acoustic "filk" (sci-fi folk) tune. And then there's death-metalers Stovokor, who not only dress up as Klingons, but they sing in the Klingon language.And if you ain't down with that, well, pally, you have landed on the wrong blog.

I don't know much about 'Trek" beyond watching the original series ("TOS" in Trek talk) as a kid, but it's inside nature is what I like about this stuff. Fan music, like song-poems, make me realize how generic most music is. Frank Sinatra couldn't have sang about "Star Trek" (or what his favorite color is, or who he supported for President) because he had a general audience, so we just got lots of love songs since, presumably, that's a human universal. So it's fascinating to me to hear people singing passionately about something very specific. They can only exist in the rarefied world of fellow fans, or, in the case of song-poems, they just put out tiny pressings of private recordings. They don't have to worry about what the music biz (even the "indie" end of it) thinks.

Denise Crosby played Natasha Yar in Star Trek: The Next Generation. She also produced the first Trekkies movie. An excellent movie for both fans and non-fans. Really well done film.

Love your site. Thanks!

I suppose Brent Spiner's OLD YELLOW EYES IS BACK probably plays best on an Android app....

You did it! You did it! I've been looking around to find someone singing in Klingon--Stovokor! Now I have something to look for. I always thought that DEEP SPACE NINE should have had a scene in Quark's bar holo-suites with Klingons queing up to attend a Kiss concert as devoted fans in greasepaint. Windy

Fab, it often frightens me how often you post something just as I was coming into awareness of it.

In this case, I just found a bunch of Warp 11 stuff over the weekend and happened to do my weekend M4M and found this gem.

Interesting stuff my friend. I hope all is well with you and yours.

Haven't actually seen the film, but it does look fascinating.

windy: I like to think that this is the only music blog where a statement like "I've been looking around to find someone singing in Klingon" wouldn't raise an eyebrow.

Oh yeah, that "Yellow Eyes" album - just what the hell is it with Star Trek actors and singing? Why don't they make "Trek-The Musical" and be done with it? They could bring 'em all back, even bring Kirk back from the dead.

Thanx J-Unit 1! Maybe we got a mind-meld?