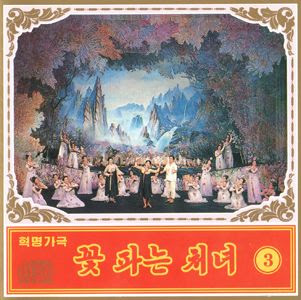 Part one of our attempt to penetrate the nearly-impenetrable culture of North Korea explored the "pop" songs of the World's Strangest Country. Today, we're getting all high-culture and whatnot, with one of the "Five Great Revolutionary Operas," "The Flower Girl."

The plot concerns a poor girl's attempt to deal with her evil landlord. Ghosts are, apparently, also involved. Supposedly written by North Korea's founder Kim Il-Jong, it was one of a series of operas "...intended to promote the communist ideology, by incorporating themes such as the class struggle against the bourgeois." Attention: cabaret singers! How catchy toe-tappers like "Covering 280 km Road after Leaving the Home Village" have not entered the standard showtune songbook, I do not know.

I guess I was expecting this to be more folkloric, like Chinese opera with it's clanging percussion and shrill vocals. It actually sounds pretty Broadway, all melodramatic string orchestrations and emotional music-theater vocals. Not nearly as relentlessly peppy as the pop songs. Goes down smooth, as good propaganda should.

Recently, She Walks Softly posted some amazing photos, and a link to a documentary shot surreptitiously in North Korea. Truly, some must-see viewing.

Interesting note regarding the VBS guide: there is a reason for the unique accent in their spoken English. Their orators and radio hosts were largely educated by James Joseph Dresnok, one of the American soldiers who defected to North Korea by way of crossing the DMZ. He had a pronounced southern accent and his influence had an effect on their English canon.

I was wondering about that! We have plenty of Korean people here in Los Angeles and they don't speak like that. They even needed subtitles on that video.

I went last summer to see the Arirang Mass Games. One of the wildest, strangest, and most memorable trips of my life.

The North Korean language has diverged a lot from that of their Southern brothers and sisters. Not only do they have a different accent, but they have also made a purge of a lot of Chinese words from their language in the name of nationalism. The South has also been inundiated with Western words and modes in the form of ever present Konglish. I asked some questions about the vocal delivery on my visit to NK and the guides told me that they believed that shrill delivery was "soothing" and that it also emphasized "revolutionary passion."