Last year, I reported on the latest sightings of sicko songsters in our society. Not only are they still at it, but some serious competition has joined them. Maniacs rejoice!

Bretts Milk "Daddy's Breath" (release date: Oct. 15) is creepy electronic "pop", like '80s New Wave gone evil. At its most subtly atmospheric, it suggests the darker side of Barnes and Barnes. Upbeat tracks resemble dance music that no-one in their right mind would ever actually dance to. Vocals, sometimes distorted, sound like the Singing Resident in need of a psychiatrist. Or an exorcist. Great fun! 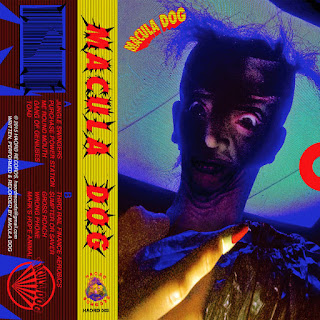 That Ostrich Von Nipple album was probably my fave new release of last year, so am thrilled  to hear him guesting on this equally brilliant album. Occasional guitarist for The Residents, Nolan Cook, who also appeared on Von Nipple's LP, applies his twisted 6-string shenanigans here as well.

Perhaps an even stronger contender for album-of-the-year (so far) is Macula Dog's self-titled release. Someone on their Bandcamp page says "It's like the Residents performing covers of Oh, No!-era Devo inside the universe of Pee Wee's Playhouse," thus saving me the trouble of writing a review - I was going to compare this great band to those very same folks, including Pee Wee!

If your head isnt caving in yet from all this elegant eccentricity, it very well may after witnessing this stupendous 9 minute video from another avant-tarde veteran, Petunia-Liebling MacPumpkin and her Electric Phantom posse. So impressed was I by the surreal hallucinations and audio manifestations of the vid that I just had to subject Ms. MacPumpkin to a brief interrogation.

Petunia-Liebling MacPumpkin - "Veggie Medley": the vegetables will get you if you don't watch out!

- Do you do all the visual effects/photography yourself? If not, would you like to give a shout-out to your collaborators?
Melody McGinn the caretaker at Electric Phantom does the majority of the visual effects/photography/editing. In this particular story however, Jimmy L. Wright made all of the veggies, Alien and Halbert (the dog). Jodie Lowther created the "set" for part 4, and Frederick Barr the "set" for part 2.

- Where do you shoot your videos? Do you have a studio?
We shoot the videos on greenscreen at Electric Phantom.
- You are in Florida, correct? Is there any strange/experimental art/music scene near you?
Yes! From Orlando originally and now in Gibsonton. hahha I believe there is a noise scene around here, but I don't go out much.

- Do you plan on releasing this music, or is it only the soundtrack to the video?
Oh it's already been released..One more video to go and the album has been completely visualized.  http://www.electric-phantom.com/merch.html

- Do you (like me) not really like vegetables, and this vid expresses your fear/guilt having been raised by your mother always trying to get you to EAT YOUR VEGETABLES?!
Actually Im a vegetarian but I had the same exact experience with meat. Maybe this is revenge.

Gibsonton is right up the road here. Inhabited by a large cadre of circus folk. Look up the tales of Lobster Boy from a few years back, that'll give you a small sense of what you're dealing with.

Makes perfect sense that Ms MacPumpkin would live there. Hey Petunia, how 'bout a collaboration with some of your town's residents?
(Or, for that matter, how 'bout The Residents collaborating with the residents?)

That video is so great. I was just having a discussion about the enviromental impacts of beef production and I put this on (just to lighten the mood!)and it went down like a lead balloon I was the only one who liked it and once again I am the weirdo.
But anyway Electric Phantom has a new fan
And I agree a Resident collaboration would be quite a treat

such a nice and good blog, congratulations!