Reposts! By request: Pierre Bastien's marvelous mechanical musics and Snoopy's Beatles Classics on Toys. I won't be re-upping any Twink The Toy Piano Band, as he has put all of his stuff on Bandcamp, so go there. 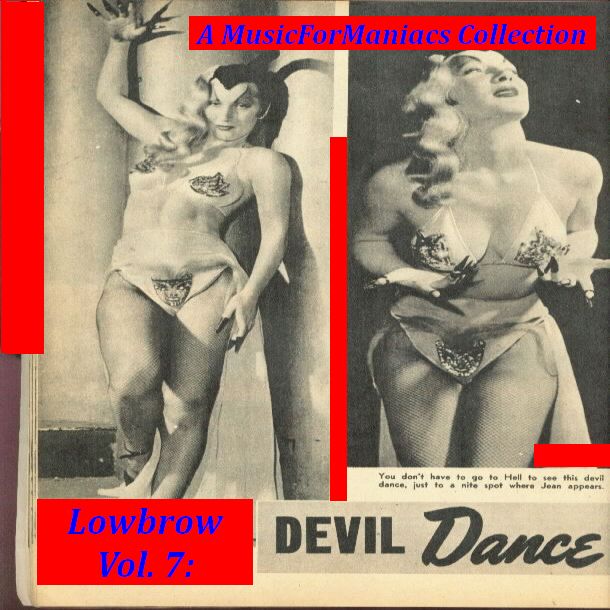 Due to a crashed hard drive, this volume was delayed and Vol. 8 was posted first, but now our series exploring mid-20th-century kool kulture is sequentially correct. In this volume, former nightclub accordionist-turned-killjoy preacher Jack van Impe warns us of the dangers of that devils' music, thusly illustrated by riotous, ridiculous, rhythm-and-blues, rock'n'roll rekkids (ever notice that Satan is often depicted as smiling and laughing? He's apparently having much more fun than The Other Guy). Lots of ludicrous novelties this time out, by artists gleefully unconcerned with making Profound Artistic Statements. You'll have fun fun fun even after - and I want to make this perfectly clear - even after Daddy takes the T-bird away.

But this time, let's add "style" to our usual mix of "sin," "sex" and "sleaze". Publisher V. Vale of the legendary RE/Search books has been bemoaning the state of his home city lately, e.g: "We think it’s necessary to read as much humor as possible these days to keep our morale up, as San Francisco daily becomes more inundated with a tsunami of “techies” proud of their acultural normcore barbarism (trendy new martinis, trendy new restaurants—is that all there is?!) 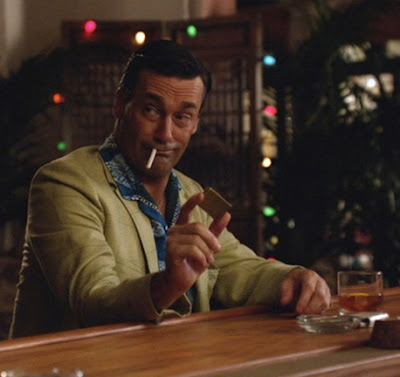 I wasn't familiar with the term "normcore," but it's apparently a fashion statement popular among urban youth that attempts to create as bland and inconspicuous a look as possible (while still prominently wearing designer labels, of course). Baseball caps, pullovers, etc. Artist-types shunning original style to look like their dad. My God-zilla! and you thought modern culture couldn't get any more boring? Perhaps that's why in recent months I've been hittin' the thrift stores looking for real flash suits and bright-colored Hawaiian-style shirts, creating outfits like the one Don Draper is sporting here. (Shirt collars OVER the jacket, doncha know.) And paisley shirts! They might go well with my Peter Fonda "Easy Rider" sunglasses. Gotta buy a new pair of Beatle boots tho, as the ones I had when I was 20 are sadly long gone. And where can I get a medallion to adorn my chest as I wear my v-neck, wide-collar David Cassidy-type paisley shirt? It's kinda like this one, only blue. There must be someplace where one can get those loud shirts Nelson Mandela used to wear. If any shirts are worth $95, these may be them. Fashion tips in comments, please. And photo links, esp. from ladies sporting leopard skin prints.

Loud clothes - clothes that go up to 11 - need loud music. So once again, we're pouring in your earholes lots of stuff taken from my mostly 45 rpm vinyl discoveries that have not only not appeared on other like-minded compilations (so far as I know), but have never been digitally available...until now! Can find no info on some of these mysterious sides.

5/14/16
RobGems.ca Wrote:
Jack Van Impe lives right here in the town of Troy, Michigan, and still has a Sunday morning religious program on TV-WDAL Channel 38 from Mt. Clemens Michigan. He still preaches from the Bible, ogles lovingly at his wife Rexella, and condemns Muslim Americans like a man possessed. He says he's just doing God's work, but that is questionable beyond his bigotry, and he got kicked off a couple of local Detroit networks as a result of his heated opinions. The "Kiss Of Fire" record you mentioned above is a re-make Georgia Gibbs recorded for Al Massey and Larry Utall at Bell records in 1965. It is often referred by record collectors as "Kiss Of Fire '65", and was re-recorded to capture some of the rock market at the time, though Georgia Gibbs was nearly 40 years old at the time. The following couple of months had Bell records issue a full-length album titled "Call Me" (Bell Records #6000) to capture the local success of the single (it was popular in New York, but didn't chart in Billboard's Hot 100.) The Royaltones were from Dearborn, Michigan, and were led by saxophonist/clarinet George Katsaskis, who used the stage name George Kaye. "Wail" was the B-side of their most popular disc, "Poor Boy" (their only Top 40 record.) Originally recording for Harry Balk at the Detroit-based Twirl Records (who also recorded Del Shannon and Johnny And The Hurricanes).the "Poor Boy/Wail" disc was leased to Jerry Blaine at Jubilee Records in 1958 and charted at #17 on Billboard's Hot 100. Legendary Detroit musicians Dennis Coffey and Bob Babbitt later recorded with the band in 1963-67. The Royaltones also backed up Del Shannon on some of his Amy/Berlee/Big Top recordings during the 1960's (most notably on "Do You Want To Dance" and "Keep Searching".)The Applejacks were a studio group organized by Cameo/Parkway head Dave Appell,and are not to be confused with the 1960's British band that recorded for Decca Records. ("Mexican Hat Rock" and the above mentioned "Rocka-Conga" were their two Top 100 hits on Billboard.) I had no idea that Bruce Johnston once recorded a tribute record to Soupy Sales (I believe it was originally recorded for Bob Keane at Del-Fi Records during his "Surfer's Pajama Party" period from 1961-63. I haven't located a copy of this disc, but would like to, and I am surprised this didn't hit in Detroit, where Soupy had (and still has even 6 years after his death) a large following. Soupy was doing his TV show live on the air in New York at the time for Channel 5-WNEW.),but he was still popular in Detroit.

Nicely done, thanks! Yeah, "Kiss of Fire" was one mystery record that particularly intrigued me, but the only info I could find was regarding the orignal version. Was beginning to think no one else knew about this one. I only Bought the record for its title as it sounded rather exotic and sexy, and hence really lucked out then cuz its a much cooler side than the orig (which is fine in itself). Just as I bought "Wail" for its title, hoping it would, well, wail. And it does indeed function as advertised. "Rocka Conga," another one purchased on the strength (?) of its silly song title.

Cheers I'm not a robot

You're welcome, Anon, and I wouldn't think any less of you if you were.

Seems like tracks 4 through 10 are missing. Am I doing something wrong?