Evangelist Jimmy Swaggart "The Ring Of Fire: A Message To The Youth of America" 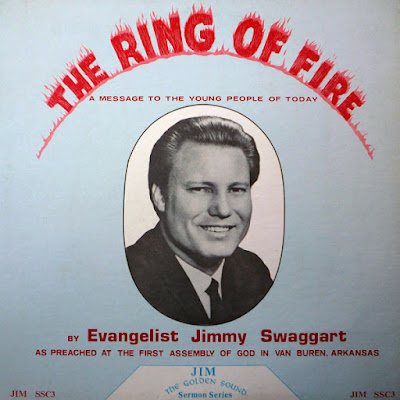 You boys and girls that have Beatle records at home...This is the most rotten, dirty, damnable, filthy, putrid FILTH that this nation of the world has ever known. And you parents that would allow this filth to be in your home, you ought to be taken out somewhere and horse-whipped, you hear me?
-- Jimmy Swaggart, "The Ring of Fire", 1968"

When reader Kenny left that comment, referring to the sin-tillating collection "The Big Rumble", I said: well sweet jumpin' Jeebus on a pogo-stick, I have got to have that album, pronto! And long-time M4M contributor Windbag came thru. But no-one's a bigger windbag then disgraced whorin' porn-addict Jimmy Swaggart, who somehow makes his cousin Jerry Lee Lewis look respectable, with his message to "the Youth of America." Presumably then, you European, Asian, African and Latin kids can have all the fun you want. Damn you!

In a most enjoyably hyperventilating manner, Swaggart huffs and puffs against the immoralities of our age. Not too surprising, given the above quote, but he even suggests that the appropriate response to children disobeying their parents is the death penalty. Hey, that's what the bible says! If you're thinking of sampling this album, Meat Beat Manifesto (meat)beat you to it 20 years ago, but don't let that stop you. There's still plenty of nuggets waiting to be mined by the right DJs/sound collagists. I really did LOL out loud when he went off on Mom putting on her miniskirt and going out to dance The Frug! The Monkey! The Watusi! Despite the title, he does not sing any Johnny Cash songs, however.

After 6 discs celebrating Sin City, I think we really need to attempt to cleanse our damned souls now:

Jimmy Swaggart "The Ring Of Fire" 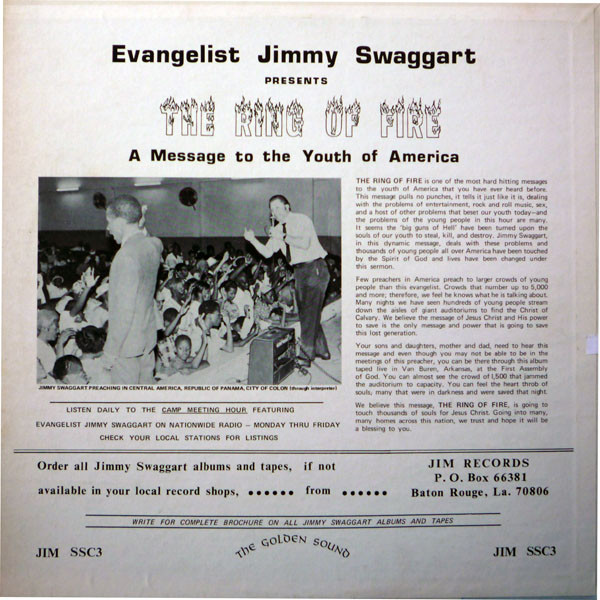 Bothers and sisters, let us give thanks and praise to the Most High Windy!

I have a couple of Jimmy's sermon records, including the 'Atomic Bomb' one. I might have that one, I am not sure.
The ones I DO have are sort of not fun to play because they're cut at 16 RPMs and I don't have a turntable that'll do that speed.

Here's a good example by the pioneering Christian Marclay
https://www.youtube.com/watch?v=e_Lh915JVv4

This is the same guy who now uses rock & roll beats in his prayer sessions!
What a hypocrite, but no more than what you would expect from these bible-bashing nut-jobs.
Anon

Ah yes Kenny, clearly you have a better memory than me - I have that Marclay album. Forgot that Swaggart was on it, but its been a while since I've played it. Great stuff.

Yeah, I remember when turntables went from 16 to 33 1/3 to 45 to 78. Confusing tho, as I Never saw any 16rpm records anywhere. Its too bad music consumers no longer have the ability to change the speeds of recording as much as they used to.. It's like publishers telling you how fast to read a book.

Most 16 RPM records were spoken word things, radio discs (some of them were 16"!) meant for radio airplay prior to the age of magnetic tape. I guess the fidelity was not that great.
I remember having a giant antique tube radio/turntable that had a 16 RPM setting on it in our house when I was a little kid and hearing 45s played on that setting. It was pretty spooky.
I occasionally buy something on 16 or 78 RPM and rip it to a computer and adjust it in Audacity. It works pretty good either way.

Anyways, for high comedic relief, I always turn to the Swag Man! He's almost as funny as Sam Kinison.

"The only difference between a cult and a religion is the amount of real-estate they own "(Frank Zappa)
just the tip.