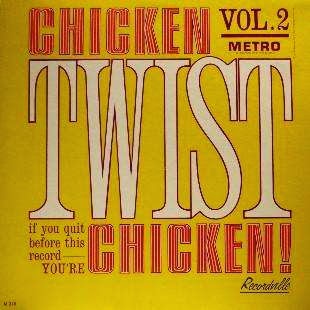 Five years before The Velvet Underground recorded "Sister Ray," the utterly unknown Paul Livert & The Lions recorded two sides of non-stop primal rock'n'roll madness. There were many records released to cash in on the Twist dance craze, and most of them get pretty boring after a while. But this one could ignite any alcohol-drenched evening of debauchery - it's all instrumental (in the ever-reliable 12 bar blues form), all raunchy honkin' sax, wacky slide guitar, fat organ, and relentlessly pounding drums. The momentum builds until the final minutes of side one sounds like everything's about to fly out of control. Side 2 is a little more relaxed (maybe they burned themselves out) but those nutty Hawaiian guitar solos are almost cartoonish. And the sax player is always on.

We kicked off our new weekly "Filthy Friday" series last week because I've been pondering: is 'cool' dead? A number of events coincided recently: an article (in Slate I think?) asking: what does cool even mean nowadays?; the Smithsonian Institute photo exhibit "American Cool" currently on display thru Sept (doesn't something have to be dead, stuffed and mounted before it's in a museum?); reading a lowbrow art zine complaining about how the 'nerds and squares' have taken over; and being stuck in traffic in front of the Los Angeles Convention Center hosting an anime convention and being dumbstruck by the sheer volume of nerdliness on display.

I don't hate nerds, as I'm sure everyone has a little nerd in them somewhere, but it has occurred to me that with the recent deaths of Lou Reed and the last surviving original Ramone, there are precious few cool icons left. Any young Miles Davis or Johnny Cash sorts coming up today, or just pale imitations? Meanwhile, the rise of internet culture, political correctness, ComicCon-type stuff, etc is all making mid-century culture look increasingly alien...and to some of us, attractive.  No wonder "Mad Men" is such a popular show.

On a musical level, few rock critics even bother with the pre-Beatles/Dylan era. Sure, they give props to Elvis, Little Richard, Chuck Berry, etc., but for the most part, the lower-income, chemical-fueled, sleazy aura of early rock (like its cultural contemporaries burlesque/strip clubs, exotica, nightclub comics) doesn't get much respect and is something that's rarely examined. It doesn't fit in with the Rolling Stone/Rock 'n' Roll Hall of Fame-approved view of history. Like how jazz, born in brothels and for years primarily a dance music, has somehow become 'America's Classical Music.' All of this takes the fun out of it. And is bad history to boot. Much of the music I'll be featuring here was found in the 99 cent bin, has never been digitally reissued, and as I have been unable to find much info about these artists, is apparently forgotten.

I believe cool developed as a way for at-risk people to deal with a cruel world. You could either curl up on the ground whimpering in fear, or put on your shades, act like you're above all this nonsense, and have a ball. But life in the Western world is generally getting easier (I emphasize 'generally'), so cool, like an evolutionary adaption that is no longer needed, atrophies. Bad-ass '50s actor Robert Mitchum actually served time on a chain gang. Today's Tom Cruise-types have only served time in acting classes. Which is probably why the hip-hop world and it's aura of street authenticity has so successfully moved into acting. (Ice T? Coolest guy on TV.)

Of course, there will always be poor and oppressed people, so maybe cool will take new forms. But til then, we're hosting an Irish-style wake for cool, inviting over all the hepcats 'n' flipped chicks, beatniks, hot-rodders, greasers, strippers, lowlifes, drunks, comedians who 'work blue', and JDs, breaking out the booze, watching 'B' movies, and whoopin' it up here every week til I run out of bargain-bin vile vinyl. We gonna party like it's 1959.

Any chance of some authentic beatnik material? After all, they pretty much invented cool, daddy-o! And also hippy and goth, both at the same time, too early and MUCH too early respectively, while being simultaneously more depressing and more pretentious than Morrissey. And they invented heroin chic too - how much more decadent can you get?

OK, so they did all this while dressed as a cross between Marcel Marceau and those guys with onions all over their bicycles (whatever happened to them?), but nobody's perfect. So let's have some of the Beat Generation's best! Not forgetting, as nearly everyone does, that in this context, "beat" means "beaten".

PS - If you're a bit short of the genuine article, you might want to sample the soundtrack of Roger Corman's no-budget beatnik horror spoof "A Bucket Of Blood"; some of the poetry is, er, interesting...

See you on the road, dharma bums! - The (out for the) Count.

By the way since this LP consists of either two 20-minute tracks or one 40-minute track, does this mean that Paul Livert & The Lions invented prog rock?

Count, I've been digitizing/compiling beatnik novelty tracks for a great big Beat-off. Um...perhaps I should re-phrase that...

Interesting thoughts on the obsolescence of "cool" as survival strategy.

I wonder if the grand/florid sort of cool Lou, Miles et al represent is just too conspicuous, too big a potential target to be viable among the wristband-wearing status-updating little drones?

Hmm, yes Reimer, Perhaps the outsized pimps of the '70s who were def. cool-as-f%$&, looked to be too easy a target against the younger, hungrier street gangs. But damn, they had style.