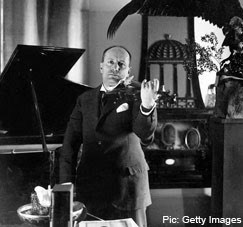 Everything's always "Hitler this, Hitler that." What about Mussolini, huh? He was a bloodthirsty dictator, too! And he was Hitler's bud, eventually overthrown and killed by his own Italian countrymen, they hated him so. Well, not all of them. Like whoever started the mussolinibenito.net site (sign their guestbook!). Quite a generous assortment of pro-Fascism/Il Duce mp3s are found on the site - mostly music, but some speeches ("discorsi") as well. The music seems to consist of upbeat marches and rousing sing-alongs, e.g. "Allarmi siam Fascisti," which translates to "At arms, Fascists!" It's the kind of pre-caffeine anthem you need on a Monday morning.
This article details Il Duce's love of music.  He even played the fiddle.
CANZONI MP3 DELL' EPOCA FASCISTA - click on 'Canzoni MP3' in the left-hand column

There are also some Irish rebel songs on the bottom of the page. I don't know why.
(I tried to add info to the mp3 tags of the songs I downloaded, like 'Mussolini songs' or whatever, but it wouldn't let me. It's locked, I guess.  Buncha fascists...)
Posted by Mr Fab at Monday, February 11, 2013

Judging by what happened when I wrote about Mussolini's bloody awful novel, the Cardinal's Mistress (http://oddbooks.co.uk/oddbooks/musso.html), this page will shortly be visited by a bunch of halitotic fascistogroupies telling you what to think.

The mp3s are read-only, MP3TAG easily fixes this on the fly.

Thanks Woodworker, my lack of computer knowledge knows no bounds.