Exactly 25 years ago, Los Angeles was playing host to the Olympics, and both parties never had it better. Terrorism, boycotts and financial disasters had the International Games on the ropes, ready to throw in the towel. L.A. practically saved 'em with what is still the most successful Olympics ever. And the city never ran better. Tom Bradley was then in the middle of his almost 20-year run as mayor, overseeing the transformation of second-rate cowtown into a world-class city. So what's the big deal about a black president? We had a black mayor who kicked butt decades ago.

It was summer vacation. Back East relatives were staying with us cuz they wanted to see the Games. As a basketball-loving kid, I was in heaven. My friends & I got to see Team USA, featuring future pro legends Michael Jordan and Patrick Ewing, stomp all over the hapless French team. And I was glued to the radio, buying more records then ever...and taping records from friends. (Hey, I was young - that allowance only went so far.)

It was a great year, maybe the greatest year, for the punk-spawned independent rock scene, and L.A. was in the thick of it. SST Records was ruling college radio with landmark releases by Husker Du (from Minneapolis, not L.A.) and The Minutemen - their 2-record set masterpieces "Zen Arcade" and "Double Nickels On The Dime" came out the same month. And Arizonans The Meat Puppets, who spent so much time here early in their career that they could practically be called locals, released "II," yet another classic that I never seem to tire of, immortalized years later when Nirvana performed not one, not two, but three songs off it on their "MTV Unplugged" appearance. Though, of course, the Pups versions were superior. Here's an exclusive mashup from RIAA, pairing a "II" tune with a British hit from around the same time, Yaz's "Don't Go":

RIAA "Split Yourself And Go"

The Bangles and The Red Hot Chili Peppers, years away from their enormous commercial successes were, at the time, scrappy local club bands. The Bangles were never better then their '84 release "All Over The Place." Early on, they honestly really didn't suck. Suspend your disbelief! I mean, check this tune. It's a great bit of pop-punk that the Buzzcocks would have been proud to do, and should hopefully rinse "Eternal Flame" from your mind:

The Bangles: Silent Treatment (Even after all these years, I can never remember that title; I always called it the "she said nothing" song) 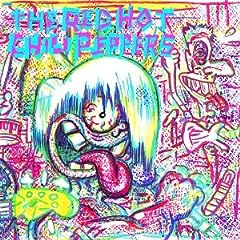 vats of yogurt at each other?) that their slickly-produced album debut was a disappointment (apart from the album cover by the great cartoonist Gary Panter). But this demo of one of those early songs is a totally killer one-minute blast of punk/funk that actually sounds like The Minutemen, and hints at what a great album it could have been:

America's first goth scene was forming here. This might seem unlikely, but I think the relentless heat and sunshine makes a little cool darkness refreshing. Some of the "death rock" (wasn't called 'goth' yet) bands like 45 Grave owed more to the 'Monster Mash' then anything else, but before Jane's Addiction, Perry Ferrell's group Psi-Com had a pronounced British post-punk* influence. No-one remembers these guys, but I dug this one:

Philip Glass, a New Yorker, recorded a stirring piece for the Games that sounds a bit overly-familiar now, but his brand of Minimalism was quite a welcome shock at the time. Don't think this is in print.

Back to the locals: Redd Kross provided a lot of the music for a crazed Super-8 film called "Desperate Teenage Lovedolls," along with Black Flag (moving into their post-hardcore avant-jazz phase) and Bad Religion. Swell power-pop; they should have been as big as The Bangles.

Redd Kross: "Ballad of a Lovedoll"

1984: Compton's KDAY ("AM stereo!"), America's first hip-hop station, goes on the air. I read somewhere that this was when Uncle Jamm's Army released LA's first hiphop record. This enormous crew was a virtual who's-who of early West Coast rap, including future legends like Egyptian Lover and Ice-T. This tune's off my 12". Don't think their stuff ever appeared on CD. Though not the classic that '85's "What's Your Sign" is, it's still a pretty fun bit of fast-paced electro nonsense, and certainly nothing like the kind of thing that LA rap would be famous for a few years later.

Ah, what the heck - it's Saturday, don't have much to do today. Let's mp3-isi

ze a cassette of a 40-minute radio concert I taped off the air way back when. Background hiss! In mono! But who cares. A godhead band. Don't know the exact date, but it's at least '84 judging by the tunes. As critic Robert Lloyd wrote at the time regarding "Double Nickels," The Minutement go "from funk to punk, from folk to polka."

The early '90s saw dark days for LA (earthquake, riots) but things have been great lately - Lakers won the title, lowest murder rate since the '60s, subway, etc. Culturally, we're still the 800 pound gorilla. So I'm not being overly sentimentally nostalgic here. (Am I?)

*a phrase NO-ONE besides music journalists used at the time
Posted by Mr Fab at Saturday, August 08, 2009

My weekly visit to your blog. Good work. Thanks for the chili peppers tune, I saw them in a bar in Michigan in the late 80s. They were awesome. I had never heard of them before, but I danced trough the whole show. Nothing totally maniac, but a funky and rocking show. Now, i know the Lakers are great, but maybe next year will be Cleveland's year.

Now that Cleveland's got Shaq, that is very possible.

Oh, and French players are damn good now - there was one on the killer Orlando team.

for the best minutemen cover band in the world check out "the fords of chaos"onSLUGGISHA.BLOGSPOT.COM THanks,leave comments,G O D

Some swell tracks here from artists I listened to back then.
Nice work on the riaa one.
Thanks also for the m-men concert.I tried to go see them in houston,but it was too violent for me before I even got in club.lol

thx for the minutemen - saw them a couple or three times in london with black flag and nig heist (84?) - always great to find something else to hear from them!