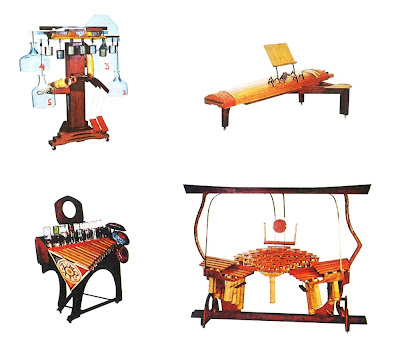 Yes folks, this weekend in Los Angeles it's a steel-cage death-match between two California prize eccentrics whose idiosyncratic music is performed on theatrical home-made instruments.

In this corner: Harry Partch, dead, former hobo who spent the '30s and '40s hopping trains, traveling around the country in pursuit of a buck and a meal, composer of songs that sometimes reflected this background, creator of fantastical micro-tonal instruments, the subject of a concert this Fri and Sat downtown at the REDCAT performed on said instruments, lovingly restored.

from the out-of-print '60s classic "The World of Harry Partch," tho a remake from 1982 by his ensemble can be found on "The Harry Partch Collection, Vol 2."

corner, Llyn Foulkes, alive, one of the "Visionary Artists From L.A." featured at the Hammer Museum in Westwood whose non-conformist attitudes have kept the art-world from embracing them, who will be performing original songs inspired by his Spike Jones and swing-infused youth this Friday night on his "Machine," a one-man band riot of honk-horns, percussion, organ pipes, and a bass string.

Llyn Foulkes: "Top of Topanga"
from the mini-album "Lyn Foulkes and his Machine Live!"

"Barstow" is a classic gateway-drug to strange music: catchy melodies, fascinating lyrics and back-story. Play it for your Top 40-brainwashed loved ones.

So, now you know where I'll be this weekend. Who will be the winner? You!
.

Great! I love Partch, but now that you introduced me to Llyn Foulkes (Waits meets Jones) I have to vote for him. Any idea where I can get the album? CD baby is out apparently. :(

Ah, damn, didn't realize CD Baby was sold out. They were selling the disk at the show actually, so it is still in print. Maybe the Hammer bookstore? Tho they're not on the Hammer website, but if you call 'em they might have some copies.

Otherwise I'm afraid I don't know. I'd post the whole thing if he wasn't still selling it...

Have you heard of John Schneider, who plays Partch music with replicas of his instruments? Saw him in Los Angeles, was amazing. I've blogged it at http://tinyurl.com/l7gkpg

Hey, I think I was at that show you wrote about in your blog!