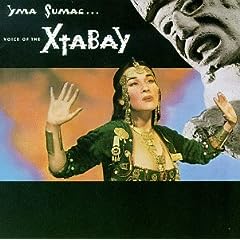 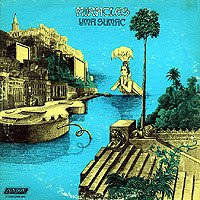 THIS JUST IN! Just got a note from Nick Limansky, author of the new book Yma Sumac: The Art Behind the Legend . He's a classically trained singer, and, incredibly, has been working on this project since 1980. It looks to be an essential part of any Maniac's library.
Posted by Mr Fab at Thursday, November 13, 2008

this is a wonderful tribute to Yma, who is one of my favorites too. things just aren't the same ever since she left the planet.

In the late 1980s, I actually saw Ima Sumac perform at the Hollywood Roosevelt Hotel. Her voice was as good as ever, but she was only on stage for about 15 or 20 minutes. Maybe it's all she could muster up before her voice went. In any case, I count myself very lucky.

Thanks for the retrospective!

Yeah, she used to play the Cinegrill a lot. That place was expensive. Didn't she do mostly things like showtunes?

Yeah, it was expensive, which made the crowd doubly cheated since she was on stage for such a short time. I don't remember her doing showtunes, but I guess I was so dumbstruck that I didn't remember what she sang.

I meant it made the crowd FEEL doubly cheated.