Coon Songs: The Most Offensive Music EVER?! 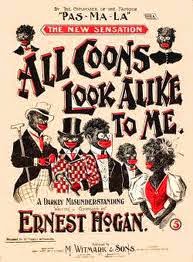 While it's still Black History Month, let's explore the outrageously offensive genre of minstrel show/black stereotype musics known as 'coon songs.'  Hugely popular during the early decades of sound recording and then wiped from the culture like they never existed, coon songs nevertheless produced not only the recording industry's first black stars, but some of the first hit singles ever. Minstrel shows in general led to vaudeville, the root of modern American show biz. And yet Al Jolson's blackface performance of "Mammy" in the ground-breaking film "The Jazz Singer" is probably the only experience most people have had with this genre.

I have enough recordings (songs and comedy skits) to fill up 2 or 3 disks, but that would make even a Grand Kleagle of the KKK's head explode. I've whittled it down to this representative selection of the history of the genre - from the pre-master disk era of he late 1800s when, incredibly, a mass of recording cylinders had to be set up to record each performance individually (so the poor singer had to sing the damn song over and over) up to the genre's apparent demise in the 1920s, the era of the "Great Migration."  Black Americans started moving from the rural South, transforming the culture of Northern cities like New York (hence, the "Harlem Renaissance") and Chicago. With the Jazz Age in full swing in the Twenties, the old stereotypes of country bumpkins pining for them good ol' plantation days were no longer too convincing (not that they ever were.)

You'll notice a subtle transformation as time progresses, from the mocking humor of "All Coons Look Alike To Me" to sympathetic songs about children, or "pickaninnies." Coon songs were becoming uncool, and believe it or not, these sentimental ballads were considered to be positive coon songs, written to counteract the cruelty of earlier songs. Hey, they meant well....

How popular were these songs? I can't find a single book specifically dedicated to the subject, but "From Edison to Marconi: The First 30 years of Recorded Music" has a whopping 6 page index. 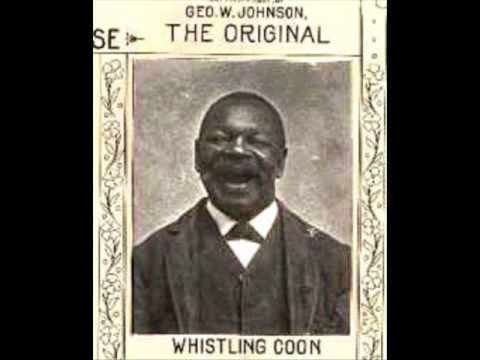 They're not all that awful. Some songs, like "Pullman Porters' Parade" salute America's black railroad workers, and "Nigger Blues" really is an early blues tune. Some certainly have musical value. George W. Johnson's records were fun and funny, and that's apart from their massive historical value - he was the first black singing star, thus paving the way for everyone from Robert Johnson to Nat King Cole to Michael Jackson.  (You can't condemn him for these songs. It was the 1800s, what choice did he have?!) And "Bake Dat Chicken Pie" is, once you get past the reprehensible lyrics, a great tune, especially the way the intertwined vocals suggest Dixieland jazz. I felt weird about liking this song 'til I heard that Lenny Bruce was also a fan, and would play and sing along with the record in his act. I am vindicated! Er, maybe...honestly, snickering really is the most appropriate response to the amazing ridiculousness of these songs. Here's a party game: try to listen to "Ma Pickaninny Babe" without laughing.

A Treasury of Beloved Coon Songs 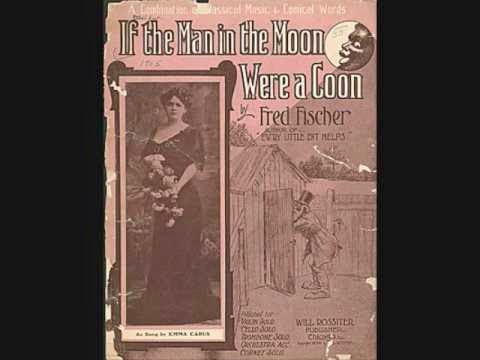 Thanks to the Archeophone label, and the UCSB Cylinder Digitization Project for some of these; there's more HERE and HERE. And then there's THIS album. But I leave all those to the truly dedicated scholars.

pardon my language but this is the best f**king g*d d8amned post i've seen in years. kudos to you!!!!

Two songs by Kate Smith from the early '30s on an Lp on Sunbeam Records:

"That's Why Darkies Were Born" and "Pickaninnie's Ball"

It's part of our history.

Offensive? It's just this so-called PC which is nothing but a load of bull$#!t.

Mr Chandler: Ha ha, as the governor of this blog, I pardon you.

Early 30s, eh Windy? Wonder when the last coon records were made in America. Just got a note from Count Otto reminding me of "the Black and White Minstrel Show", which ran on British Tv into the 70s, and Phil Milstein posted a 1959 record from South Africa (no surprise) if you scroll down to "Worst Record Ever Made":
http://www.philxmilstein.com/probe/10.htm

Mel, I sure you aren't offended (I don't know what it would take to offend this blogs readers!). It certainly is a part of our history, hence my BlackHistory Month reference. Indeed, some black Americans collect coon memorabilia. I think we're removed enough from these times that we can look at this stuff and, as I recommended, laugh. But if you had to live with it, you probably wouldn't be too quick to dismiss it as PC bullpoop!

Is this REALLY the sort of thing we want to see over our casting of a Black girl as Jeff Goldblum's daughter in 'Jurassic Park 2'?

Did Martin Luther Ferguson die for nothing?

I am hereby cancelling my subscription to your journal.

Yours with the greatest respect etc

the rendition of 'bake dat chicken pie' in this collection is a later-recorded, cleaned-up version of the original. for the sake of historical accuracy, i offer here a link to the very, very racist original. listen at your own peril.

Thanks for that Barbra, also a great version. The slower tempo made it seem more, dare I say, funky?

This is greate! I bookmark this blog for your music taste :-)

Looks like the only people commenting here get a real big kick out of racist art promoting stereotypes that hurt and continue to hurt people today. The way your post is written and the delight/amusement you get in this music as curio is ignorant and disgusting...play a party game trying not to laugh? I hope you're not deluded enough to think that writing these 'jokes' and being one racist motherfucker are not the same thing. I've promoted your blog on my outsider music radio show and at my station for years, but after this post I no longer feel comfortable doing so, and many other of our DJs agree. Yes, this music is part of our history but the way you wrote about it promoted the worst side of it and clearly pandered to a blog audience that looks, feels, and thinks just like you. Wake up and smell your own bullshit and stop preaching to a choir of "anti-PC" closet racists.

Also, "removed enough from these times" to laugh?? Read the news.